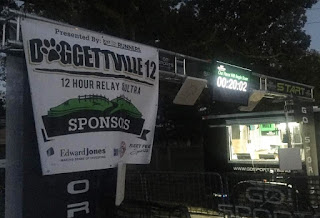 I can't remember how I stumbled across this small 12 hour race last year, but I did.  It was the first year of this race held on a family farm.  The price was right for a supported 12 hour training run, so I signed up.  The bad news is, after running Umstead 100 followed by the Raleigh half marathon the next weekend and then Oconee 50K three weeks later, I ended up with a stress reaction in my cuboid bone in my right ankle.  It was a nagging injury that I would never let heal and run again and it would get worse.  I finally had in MRI at the end of July 2014 to get the official diagnosis.  This knocked me out of three events I had registered to run in fall of 2014 including Doggettville and Uwharrie 100.

I was able to defer to 2015 and almost forgot about this 12 hour event.  I figured why not go run it, it is already paid for.  Plus instead of a shirt, they give out pajama pants which I think is way cool.  The not so cool part is we ended up having to put our dog Earnie down the day before the race.  So I was stressed out, sad, drank a couple beers, had trouble getting to sleep.  You know, all the things that set you up for a perfect race day.  So on Saturday morning, I got up at 3 am to leave the house at 4:30.  Pulled in the parking lot of the race about 6:15.  Plenty of time to set up my drop bag with more stuff in it than anyone ever uses on race day.  There was something like 15 solo runners and 5 to 8 relay teams.  There was a race brief which included directions for the course with instructions like "turn right up my sister's driveway".  It was truly on a family farm.  At 7 am we were off and running.

I tried to settle in to a rhythm and walk uphills from the beginning.  I met some guys and had some conversations and just settled in for the day.  The advantage of a one mile loop is it didn't take me long to pick out some marks along the way.  I had figured out if I run to this bush and then walk to the top and start running at this arrow on the ground, etc, that I would be right on pace.  Things went great and I ticked off 17 miles in the first three hours.  Just a little over a 10 minute pace.
Now let me share my goals for the race.  My "A" goal was 60 miles.  "B" goal was 50 miles.  "C" goal was to remain on my feet for 12 hours and take what I can get.  Considering my 50 mile splits at Umstead were 10.5 hours and 12.5 hours, I thought these were reasonable goals.

So right about 3 hours in to the race, my stomach started giving me issues.  This is not something I have experienced before while running.  I can only guess the stress of Friday was adding in here.  I stopped after each of the next 3 laps to use the restroom.  I was only able to walk because even a slow jog made my stomach hurt worse.  I finally asked the RD if he had any Pepto and he did!  I took a couple Pepto tablets and walked, just walked for the next hour as my stomach slowly settled down.  Obviously my A goal was out the window with this issue, but no biggie.  Dealing with new challenges, overcoming, and moving on are all part of long training runs.  So I adjusted, recalculated pace, and settled in for a 50 mile day.

My stomach did finally settle down (for the most part) and I was able to start running again.  Then the best part of the day.  My wife drove up with all three girls to hang out and watch me run for a while.  It was a great way for them to get out of the house for a while and most races I run, they can't see me very often.  Then my youngest (just turned 6) wanted to do a lap with me.  I made it clear that there was no whining, carrying, or asking how much farther.  While I did walk the whole mile for lap 38. It was a nice break and I did walk fast.  She had to do some skipping to keep up.  She even held my hand for a quarter mile.  It was awesome!  I ran the next lap and then my other two girls wanted to do a lap.  So I walked lap 40 with Lyla and lap 41 with Emily.  Neither of them had on good shoes, so I didn't want to push them.  I should probably mention that it is now the middle of the afternoon and it had gotten HOT.  So an excuse to walk a couple laps was fine with me.  It was an extremely cool experience to get to share laps with each of my girls.  For them to see a little piece of some of the crazy stuff that daddy does.

Sarah also brought me some ginger which I ate a few pieces here and there to keep my stomach under control.  It works so much faster that medicine like Pepto.  She also brought me a bandanna that I would dip in a tub of cold water each lap and wrap around my neck.  It sure helped with the heat.
The girls wanted to do another lap, but time was getting tighter and tighter to make 50 miles.  Not to mention they needed to get home and eat dinner at some point.  So the family left and I picked the pace back up.  The last 9 laps clicked off pretty quickly.  I had 3 miles to go with an hour left on the clock, so I did not push it at all.  I enjoyed the last few laps, talked to some people along the way and finished my 50 miles with 10 minutes to spare.  It felt good to get in a 50 mile day even if it was non technical.  It is still time on my feet which is always good training.

Overall race review: Great race.  The race director is very involved all day long.  He went above and beyond to make sure everyone was taken care of.  At the end, they stamp a dog tag with your miles.  He even made one for each of my girls with 1 lap stamped on it.  Something he didn't have to do, but they loved it which in return means the world to me.  The course is varied enough to keep it interesting but easily run-able.  The couple hills are enough to justify walking, but gradual and small enough that you can easily run them as well.  For it being a small race, it is really well done.  Might sign the whole family up for next year and let them get some more laps in throughout the day. 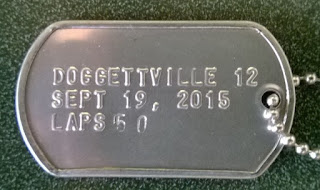 Just three weeks to the Uwharrie 100.  Still looking for a "pacer" for the last 20 miles.  This is really a nice day hike with little to no running involved.  Let me know if you want to hang out in the woods with me for a day.