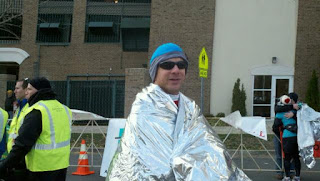 Posted by Joel Johns at 4:17 PM No comments: 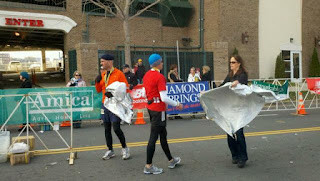 Posted by Joel Johns at 4:16 PM No comments:

Memories of my first marathon.

Ready to run a marathon?

Am I ready?  I have no idea, but the time is here.  I have my race packet with bib number 494.  My race chip is activated.  There is nothing left to do at this point but wait and run, then run some more, and then run some more.

The question has come up many times as to what my time goal is.  Well, I am going to put it out there so it is easier for people to laugh at when I come no where close to it.  Realistically my first and most important goal is to cross the finish line and not need any medical attention on the way or after getting there.  After all, I did start running FOR my health.  I have run two half marathons, the Hendrick Marrow Half and the Dowd Y Half.  Both of those were finished right around 1:52.  Other runs say that gives me 16 minutes to spare to run a 4 hour marathon.  That would be awesome and will be in the back of my mind tomorrow for probably the first 18 or 20 miles.  After that survival will kick in and the reality of running a 4:30 or even 5:00 hour first marathon will be just fine with me.

The best part about this being my first marathon is when I cross that finish line, I will have set a PR (personal record for you non-runners).  However I did get some added motivation this week to keep my pace up.  Our Associate Pastor Reta Steck passed away this week after a 20 month battle with brain cancer.  She was an amazing woman and blessed all who knew her.  She is the reason that my family is at Central United Methodist Church today.  She was the very first person I met when I visited there and thought it was so cool that she remembered my name when I went back to visit again weeks later.  I learned a ton from her in Disciple I and will be proudly wearing my "Run for Reta" shirt tomorrow.

Besides her being dear to mine and my families heart, I tell you that because her funeral is at 2 PM tomorrow.  Starting a race in Charlotte at 7:45 means I can't take a minute longer than 5 hours for my Sarah and I to make it back to Concord with time for me to shower and get to the service.  If I can accomplish a 4 hour run, we will have time to spare.  Either way, only God knows my heart, but Reta knows how bad I want to be there and would understand if I don't make it.

Now a quick brag on my awesome support system!!  In order for me to pull this off, my mom is driving to Concord tonight to stay with the girls tomorrow.  Sarah is going to drive me down there and stick around to see me off.  She is going to be back in time to see me finish and have a bag of clothes ready for me so I don't have to mess with the race bag check.  She worries about me driving after running that distance which is understandable.  I drove a short distance after a 20 mile run and it was a challenge.  I love my wife more than I can describe in a blog.  She has been patient, understanding, and supportive of my new found passion of running.  I am excited to have her there at the start and the finish line of this race.

Enough babbling.  I am a little anxious and relaxed.  There is nothing I can do not but wait and run, then run some more, and run some more... and pray.  Can't wait to spend 4 to 5 hours with God tomorrow!
Posted by Joel Johns at 10:15 AM No comments:

How (and why) I started running

For my first post EVER on a blog, I feel like I should clarify that I am not a writer nor am I sure why I started this blog other than to share my story.  Maybe somebody will get something out of it or maybe somebody will leave a comment that will help me on my journey.  Whatever the case, I have felt inspired time and time again to start a blog to share my story of why I started running and more importantly, why I still run today.  In the short 18 months of my running career, the reasons to keep moving forward are very different today than when I started.
Early 2009 at six feet and two hundred and thirty pounds, I was having some light headed spells that scared both myself and my wife.  It takes a lot for me to go to a doctor but three spells over a two or three month time did just that.  My general doc sent me to have a bunch of heart test.  One test was called a tilt table test which I laughed at.  The idea is, you get strapped to a table and you lay flat for a few minutes.  Then the table stands you up and you stand there for 30 minutes.  After standing there for a few seconds and making fun of the procedure in my head and wondering what I was going to do for 30 minutes, I almost passed out.  They quickly inverted the table to get blood back to my head and I was fine.  I failed.  So much for it being a joke test.
Failing this test started the fun because the next step was to meet with a cardiologist.  He took one look at me and profoundly said, “Let me guess, this is the biggest you have ever been.”  To which I agreed.  Next thing out of his mouth was the best medical advice anyone can get.  He simply said, “Lose it.”
Now to be fair, he did give me options.  He was fully willing and able to medicate me to get every number on every test to come out exactly where a cardiologist wants it, but as much as I don’t like going to the doctor, I don’t like taking drugs even more.  So I asked for his advice to best lose the weight to which he said, exercise 5 days a week for a minimum of 20 minutes with an elevated heart rate and shortness of breath or it does not count.
My goal was to make this fun so it would be easy to stick with.  I already owned Wii Fit and enjoyed some of the games so I went out and bought Wii Active which just came out at the time.  I got up every morning for 3 weeks and worked out with these great Wii fitness programs.  After three weeks, nothing had changed.  I did not look better in the mirror, I did not feel better, and the scale had not budged below 230 lbs.


Here was the turning point, I found the Cool Running Couch-to-5K Running Plan and figured, why not?  While the goal of getting in shape and telling the doctor where to stick his drugs were a great motivation, I needed a set goal.  I found the Streetlight 5K running on July 17th, 2009.  The Couch-to5K was designed as a 9 week program and I only had 7 weeks.  Sadly, at 36 years old, I could not run 50 yards straight.  I started out slow on the plan and modified it as needed to remove 2 weeks and yet not feel like I was rushing myself.
During these seven weeks, I also modified what I ate.  I did not go on a diet.  Diets don’t work for the long term.  I went with the strategy called “Exercise and eat right.”  Everybody know what “eat right” means, but most people won’t do it.  That will be a blog one day.  Anyway, the weight started dropping and I started getting some confidence.  On July 17th, 2009, I RAN the entire 5K in 32:00 for a 10:18 pace.
Not to skip ahead too much because I do plan to fill in some of the gap one day, but this Saturday, 12/11/10, I am going to run my first marathon carrying all 165 lbs of me.  That is right, in just a year and a half, I have lost 65 lbs and will run 26.2 miles straight.  This will be the most insane thing I have done to date.  If you took time to read this far, please say a prayer for me Saturday morning.  I can’t make the run alone!
Posted by Joel Johns at 3:36 PM No comments: